The Maya people had many innovative and defining practices and structures that helped their civilization flourish. The Maya had a numeric system, games, aqueducts, and even a calendar to tell time. The calendar that the Maya used looks very different in comparison to the 12 month Gregorian Calendar that we use. The Mayan Calendar consists of three dating systems, which make interpreting the date more unique than our dating system. The calendar dates back to the 5th century.  While the Mayan civilization contributed to its further development, the civilization didn’t actually create it. This calendar system was used in pre-Columbian Central America by cultures that predated the Maya Civilization.

Let’s explore each of the parts of this unique calendar system. Usually we see these as 3 wheels working together: The Long Count, the Tzolk’in, and the Haab. Once we have a better understanding of each part we can use their calendar to properly read dates.

The Long Count is referred to as the “Universal Cycle” by the Maya civilization. Each of these cycles is 2,880,000 days long. The Maya civilization believes that the universe is destroyed at the end of each cycle and recreated with the beginning of the next. This calendar contributed to some of the hysteria that ensued in 2012 with the prediction that the world was going to end on Doomsday, December 21, 2012 at 11:11 (UTC). The predictions were obviously incorrect.

The Long Count marks significant moments in time, The Maya created glyphs to mark the beginning of eras— when we made a complete revolution around the sun. These glyphs were carved in stone and placed in sacred places like temples and religious spaces. They have names for every day in the Long Count except the last 5 days of the final month. These 5 days were called, “ Xma Kaba Kin” or “Days without Name” and were thought to be extremely unlucky days.

The Long Count includes multiple units of time to help the Maya track the specific day or K’in within this long cycle. Here are the units of time that they use, similar to our days, weeks, months, years, decades, etc. 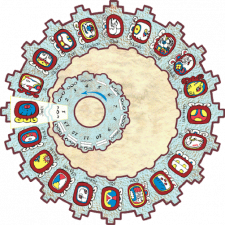 For boys the number of the day he was born will go before his name. An example of a Mayan boy’s name would be “Babajide” which means, “Father is Coming Home.”  For Mayan girls, she must have the number 9 before her name as it is a symbol of feminine power. An example of a Mayan girl’s name would be, “Akna” naming the little girl after the Mayan Goddess of childbirth and fertility. Dates and times of year do tend to become parts of a culture, for us, look at how May, April, and August have become relatively popular names. 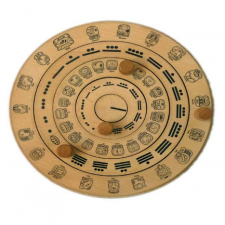 The third part of the calendar is the Haab. This part is the 365-day solar calendar that is divided into 18 months of 20 days and one final month that is only 5 days,referred to as, “Uayeb.” The Haab has an outer ring of glyphs that represent each of the 19 months. Each day is shown as a number in the month and the name of the month. An example of this from the example date April 29, 2020 we use later in the blog reads as: 9 Wo.

The Haab is seen as somewhat inaccurate because it consists of 365 days that it takes the earth to orbit the sun. We make up for the discrepancy with our Gregorian Calendar by making almost every fourth year a leap year, where we add an additional day or a “leap day” to the 29th of February, like this year.

While I was on a summer trip, I had the opportunity to explore the Maya ruins of Tulum in Cozumel, Mexico. During my journey to the ruins we passed through a marketplace where the individuals who are descendants of the ancient Maya, produce and sell authentic Mayan goods and you can watch them create by hand. As I was exploring the marketplace, the tour guide explained the difference in appearance between the Mayan Calendar and Aztec Calendar. She explained that if you do not see an image of a man kneeling with a pack on his back in the center of the calendar, then the chosen calendar is the Aztec Calendar. Look at the images of the two calendars, can you tell the difference between the Maya and Aztec Calendar?

Now that we have a better understanding of the structure of the whole calendar, let’s read it. Similar to us, the Mayan calendar system uses a series of repeating cycles based on the Sun, Moon, and planets. However, the way the Maya write the date looks different and a bit longer compared to how we write dates. They write their date in column and include the dates from each of the 3 major calendars. 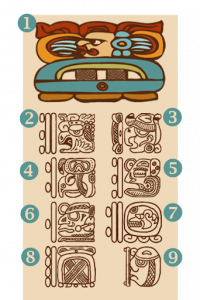 Let’s look at how today’s date would be written in the Mayan calendar and get some practice reading the calendar.