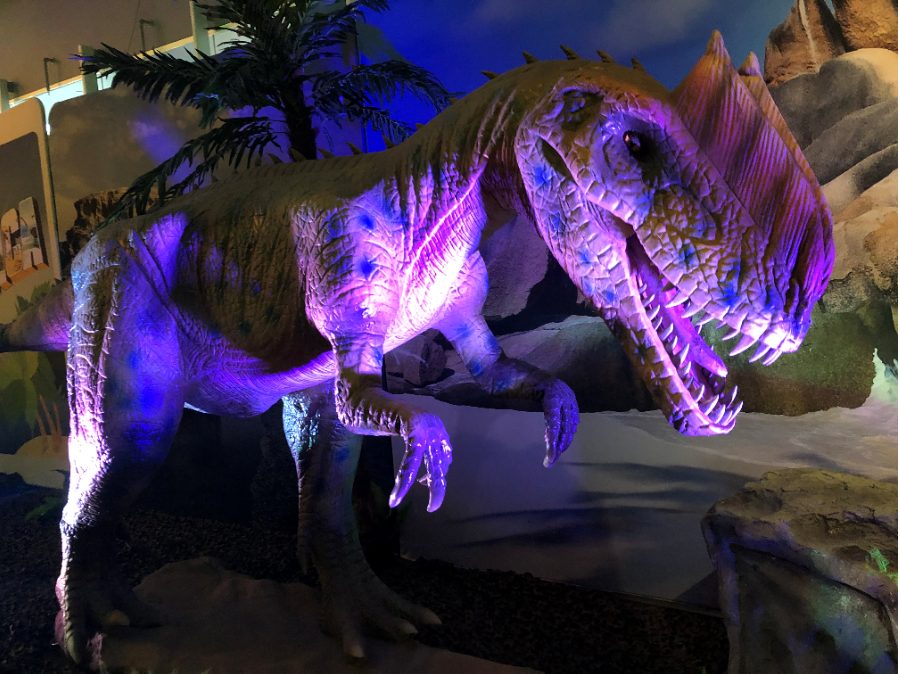 In the Connecticut Science Center’s latest exhibit, “Dinosaurs Around the World” you can find an unusual predatory dinosaur, Neovenator, which sports an elaborate crown of crests and ridges on its head. Paleontologists think these features may have been used by this dinosaur for social behavior such as attracting a mate or intimidating rivals.

But head decorations may not have been the only way this dinosaur socialized.  A recent study using CT scans of the fossil bones in Neovenator’s skull revealed a network of tiny channels all throughout the end of its snout.  These channels were filled with nerves and blood vessels when the dinosaur was alive and would have given its nose a very delicate sense of touch.  This sensitivity would have been useful in social behaviors such as face rubbing to show affection towards packmates and offspring, or as part of courtship.

Neovenator’s snout nerves would have also useful in combat between rivals. Many modern animals such as birds, crocodiles, iguanas, and seals will bite at an opponent’s face during fights for territory or mates, or to establish dominance in a group. The skulls of carnivorous dinosaurs frequently bear healed bite marks, indicating that they also engaged in this sort of combat.  The enhanced sense of touch in Neovenator’s snout could have helped it avoid serious injury in such exchanges.

This snout may also have acted like a “biological thermoemeter” to monitor the temperature of Neovenator’s eggs. Modern crocodiles bury their eggs in a mound made of rotting vegetation, and it is thought that some dinosaurs may have made similar nests. Like Neovenator, crocodiles possess nerve channels in the tips of their noses and there is evidence that they use them as sensors to ensure that their eggs stay warm inside the nest. Perhaps the crested dinosaur’s snout had a similar function.

Neovenator may also have used its sensitive snout to help pick meat from the bones of its meals. Some predatory dinosaurs like Tyrannosaurus rex bit and crushed the tough bones of its fallen prey along with the meat as it fed. This eating behavior left distinctive scratches on the dinosaur’s teeth. Studies of Neovenator’s teeth, however, suggest that it rarely bit into bone, but instead carefully stripped pieces of flesh from the skeleton. The enhanced touch-sense in its nose would have allowed it to distinguish the soft meat from the hard bones.

Come see Neovenator- along with a dozen other prehistoric beasts- at the Connecticut Science Center’s latest traveling exhibit, Dinosaurs Around the World.

Dinosaurs Around the World: Passport to Pangea is now open at the Connecticut Science Center and is included with General Admission. Visit CTScienceCenter.org to reserve your ticket online in advance of your visit.