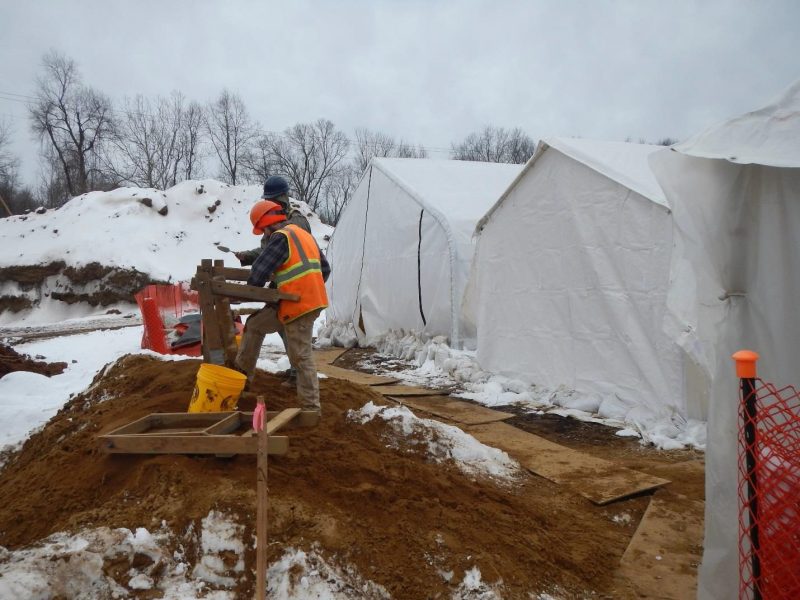 “Some [archaeological] sites are found by luck or by accident,” writes Sarah Parcak, in her book Archaeology from Space. For example, in 1900 “a donkey transporting a gentleman from a quarry in Alexandria, Egypt, fell into an abandoned shaft. What the poor donkey landed in were second-to-fourth century AD Roman Period catacombs.”

You don’t have to trek to Egypt, however, for accidental discoveries.

A demolition crew in New Haven thought they were taking apart a 1948 Art Deco building last month — a mundane task that would clear the way for a new hotel. What they discovered were the concealed remnants of an English style church that had seemingly been forgotten to exist.

Built in 1855, the Hartford Daily Courant at the time reported that “forty or fifty Episcopal clergymen” assembled for the consecration of St. Thomas’s, but what was a notable occasion then had been lost to memory in the 165 years and a congregation relocation since.

Another renovation-related discovery was made in Ridgefield, this time in someone’s home. At the end of 2019, human bones were uncovered below the foundation. The contractor alerted police, who contacted the medical examiner’s office, who then brought in Connecticut’s state archaeologist. Four skeletons, several stacked on top of one another, were found in the area of a Revolutionary War battlefield. The home would have been built a decade or so in the time since then, and the section where the bones were located was a later addition.

Work is underway to determine (1) if these were casualties of war, (2) which side they were on — British or American, (3) and who they were. It is expected to take around one year to answer some of those questions, with clues from the bones themselves. Dozens of buttons, likely from uniforms, were also found at the site. As Nicholas Bellantoni, state archaeologist explains, “we have a working hypothesis and some very compelling evidence to back it up but there’s no direct evidence yet that these were Revolutionary War soldiers.”

An even older discovery was made in 2016 when an established historical site — the Webb-Deane-Stevens Museum in Wethersfield, a complex of three houses from the 1700s — decided to build a new visitor and education center. In this case, the Connecticut State Historic Preservation Office required a survey pre-construction. Using radar, three potential archaeological sites were located, and from there, approximately 19,000 artifacts were collected including bone, shell, nails, and stoneware.

Sarah Sportman, senior archaeologist with the Public Archaeology Survey Team in charge of the project, said this is the “earliest archaeological evidence of English settlement in Connecticut.” Although many of the objects were domestic in nature, the discovery of an intact palisade tells the story of tensions between colonists and Native Americans, while the presence of wampum complicates that narrative, revealing that the groups maintained a trade relationship in spite of fears. 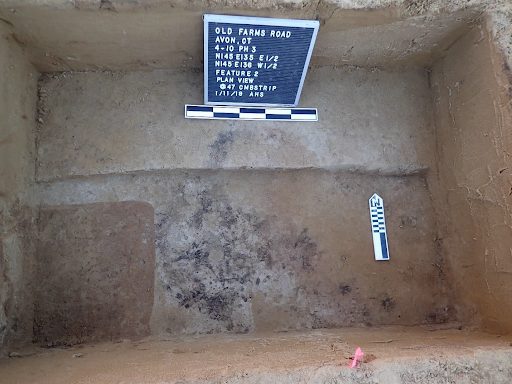 Hearth feature at the Avon site, radiocarbon dated to 12,500 years ago / Image courtesy of Connecticut Department of Transportation

One last example of the unexpected ways that science and history can overlap. To reconstruct an old bridge at Old Farms and Waterville Roads in Avon, the Department of Transportation needed to survey the area, thanks to the National Historic Preservation Act. An initial survey was done in 2012, but then the project stalled for a few years. When it resumed in 2018, a much deeper dig took place, leading to an excavation that just wrapped up in January 2020.

Although younger archaeological sites had been previously detected in the area, this recent dig, about six feet below the surface, resulted in an exciting find: 15,000 artifacts and 27 cultural features belonging to the earliest known settlement of any kind in Connecticut. The 12,470-year old Paleoindian encampment along the Farmington River included lithic/stone tools and a hearth. Within that fire pit: burned wood charcoal remnants. Through radiocarbon analysis, scientists were able to determine the site’s age. Ultimately, the Office of the State Archaeologist at UConn will keep this collection of artifacts for research purposes.

These local discoveries compel us to modify the stories we thought we knew about Connecticut. We’re also asked to adjust our ideas about how archaeologists go about their work and the role that legal mandates play in expanding our knowledge while preserving history.

Love to learn about how people lived way, way before you were born? Mark your calendar for March 2020. That’s when Maya: Hidden Worlds Revealed comes to the Connecticut Science Center.

Kerri Provost is outdoors whenever possible and is currently attempting to walk every block of Hartford. Because the world is endlessly interesting and amazing, Kerri enjoys taking a multidisciplinary approach, making connections between science, history, and more. She is the co-producer of Going/Steady, a podcast about exploring in the Land of Steady Habits and beyond.