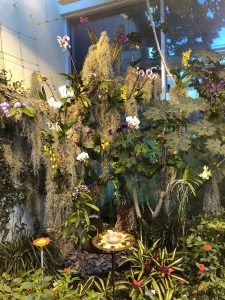 The biggest draws of the Science Center’s Butterfly Encounter are, of course, the butterflies themselves. But the plants that they flit and fly amongst deserve their own attention.

Particularly interesting are the abundant orchids, air plants, and Spanish moss that grow in our tropical garden. Take a closer look at these plants and you’ll see that they’re attached to bark high above the ground or, as is the case with Spanish moss, hung loosely draped from vines or branches like tattered laundry left out to dry. These odd growth habits identify all these plants as “epiphytes,” a unique ecological group of flora that grow on other plants without the need for soil (“epi” meaning “on top of;” “phyte” meaning “plant” in ancient Greek).

Many different, unrelated groups of plants have evolved into epiphytes, including species of ferns, mosses, liverworts, clubmosses, and even cacti; the popular “Christmas cactus,” for example, normally grows attached to trees in coastal Brazilian forests. Even familiar houseplants such as Anthuriums and Philodendrons live as epiphytes in the wild.

But the plants most specially adapted for the epiphytic lifestyle are the aforementioned orchids and bromeliads, both of which feature prominently in the Science Center’s Butterfly Encounter.

Famous for their colorful, intricate flowers, these plants can be found growing in forest canopies throughout the tropics. Aside from their flowers, orchids’ most distinctive features are their thick, gnarled green roots. In the wild these roots twine tightly around the bark and branches of a host tree, anchoring the plants in place. The spongy outer layer, or velamen, of an orchid root absorbs water when moistened by rain or mist, then acts as a seal to prevent moisture loss when the root dries. The velamen layer also protects the delicate root from sunburn. Many orchids form a tangled “nest” of roots to catch dead leaves, bird droppings, and other litter that falls from the treetops, providing supplemental nutrients.

While some orchid flowers use nectar rewards to attract pollinators, many have developed mimicry to lure in insects. Some have patterns and smells that imitate other, more enticing flowers. Others (thankfully none of the ones found in our Butterfly Encounter) imitate the smell of fungi or rotting meat to appeal to flies or fungus gnats. Still other orchids mimic the scent and appearance of female predatory wasps to attract curious males. In the process of exploring an orchid flower for a tasty meal or a potential mate, the insect partner brushes against a sticky packet of pollen known as a pollinium. Once they realize there is nothing of interest to be found on the flower, the insect leaves, carrying the pollinium along and inadvertently passing it on to the next orchid that fools them. 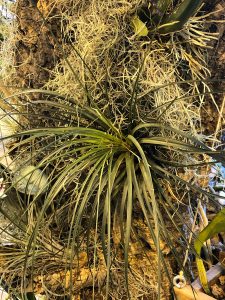 Bromeliads resemble a clump of spiky or strap-shaped leaves arranged in a tight whorl or rosette. This group of plants is probably most familiar to people as the silvery “air plants” glued into seashells or little pots and sold at garden stores.  Properly called tillandsia, air plants naturally occur in the warmer parts of South and Central America, and Florida, where they live high in the forest canopy, exposed to bright sunlight and dry air. To survive in this extreme environment, tillandsia are covered in fine silvery scales called trichomes that act as natural sunscreen and also absorb water from rain and mist. Tillandsia do have small roots, but they are used as anchors to secure the plant on a host tree and do not usually absorb water or nutrients.

Spanish moss — ubiquitous symbol of the American Deep South and other warm areas of the Americas and Caribbean — is not a type of moss at all but rather a species of tillandsia. The distinctive “beard” shape is composed of tiny individual plants (ramets) attached together in long tangled strands like beads on a chain.  Spanish moss completely lacks roots and simply grows draped over its host plant rather than being directly attached to it.

Larger bromeliads have wider, strap-shaped leaves and no trichomes since they tend to live in wetter tropical forests. The leaves of these bigger plants fit together at their bases to form cup-like “tanks” that collect rain and falling tree litter, providing the plant with a steady supply of water and nutrients. The tanks often become miniature ecosystems hosting a diverse community of microbes, bacteria, spiders, insects, aquatic larvae and even small frogs and salamanders.

Not all bromeliads are epiphytes. Many species actually do grow on the ground, such as the spiky pink-and-green “Earth Stars” found throughout the Butterfly Encounter. You’ve likely encountered another soil-growing bromeliad at the grocery store. Pineapples, that ever-popular tangy yellow fruit (and controversial pizza topping) is a bromeliad, evident from the spiky rosette of leaves on it’s top, which is itself a complete young pineapple plant that can be cut off and grown in a pot.

Though bromeliads and orchids grow on trees, they do not harm their hosts by shading them out or stealing nutrients. They merely use the larger plant as a convenient support to reach sun and rain away from competition on the forest floor.

If you’d like to see some exquisite epiphytes up close, stop by the Butterfly Encounter here at the Science Center. And hey, why not check out the butterflies while you’re at it?