What’s New In the Butterfly Encounter? Exploring the Atlas Moth

The Connecticut Science Center’s Butterfly Encounter has just added a new species to the mix of tropical butterflies.  This one may come as a surprise to what you have come to expect of the Butterfly Encounter. In addition to the cute button quails, tropical butterflies and exquisite plant life- you will now see the gigantic Atlas Moth. With a wingspan of over 9 inches, this moth is one you will not miss seeing. This unique experience offers Science Center visitors a chance to look at this rare/unique creature. 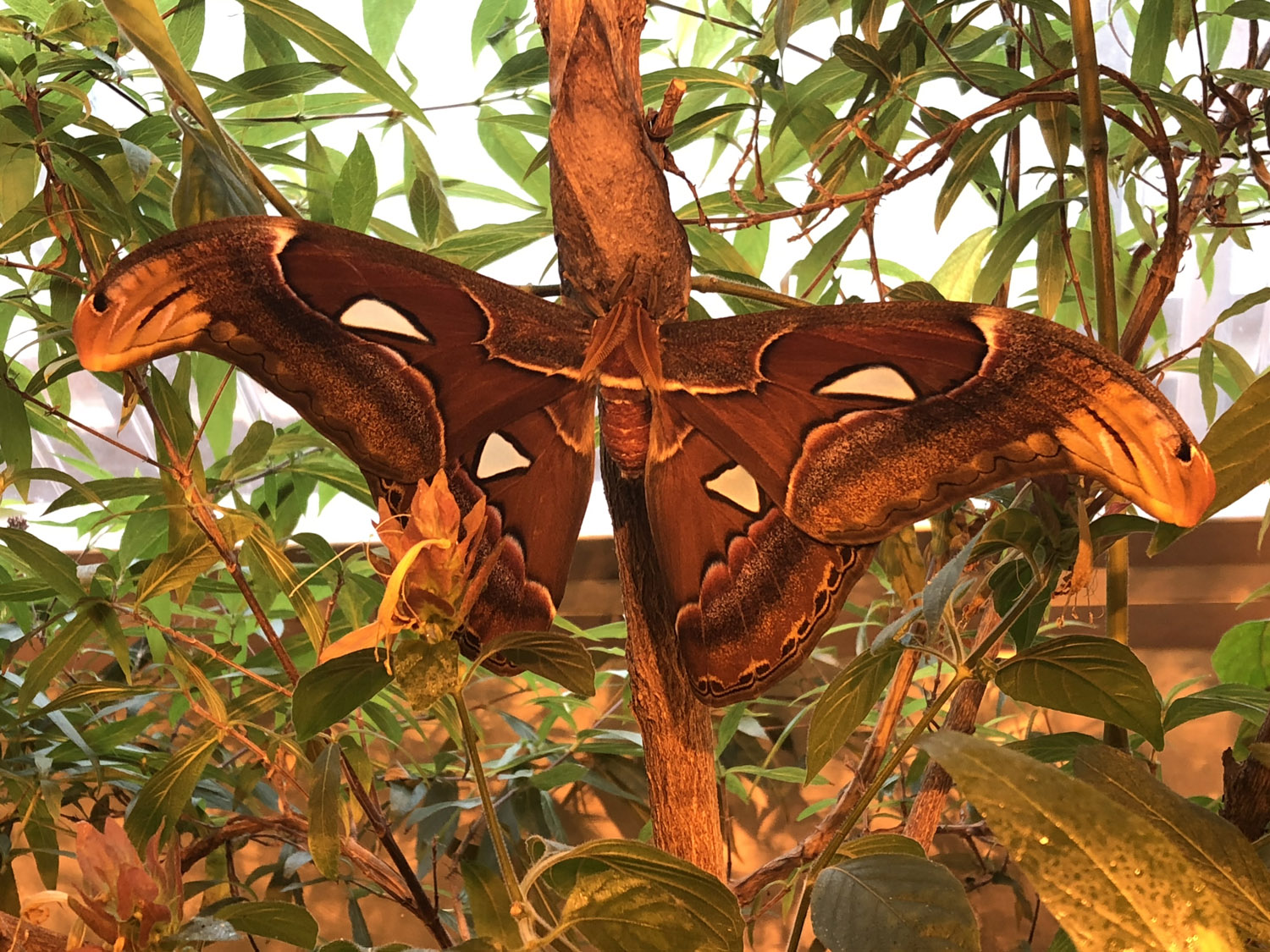 Though these insects may look like butterflies, you can tell they are moths because of their feathery antennae and plump, furry bodies. Butterflies have unadorned, wand-like antennae and their bodies are usually longer and narrower with less fuzz. Both moths and butterflies are part of the insect order Lepidoptera. Atlas moths are part of the saturniid taxonomic family, a group that also includes the famous Luna moths of North America.

Atlas Moths, known scientifically as Attacus atlas, have a wingspan up to 11 inches from wingtip to wingtip. Their common name refers to the titan Atlas who was tasked by Zeus to hold the Earth on his back. Their name may also refer to the patterns on their wings which are said to resemble the topographic features on a map. 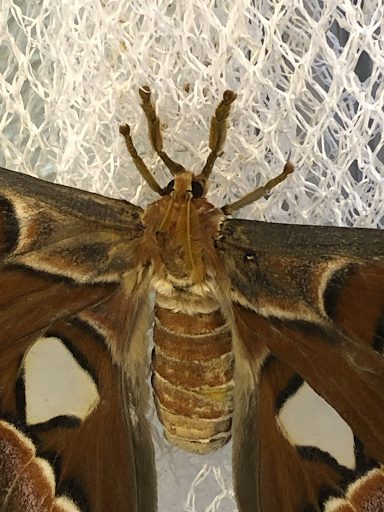 Atlas moths are native to India, Southeast Asia, Southern China, and Taiwan. The adults of this species do not have moths and cannot feed. They must rely entirely on stored energy obtained from the food they consumed as caterpillars. Because of this, Atlas moths cannot afford to waste energy, so they spend most of their time resting motionless unless they are searching for a mate. 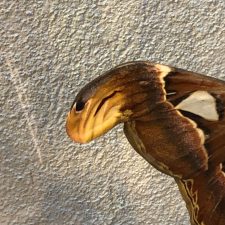 The upper wings of an Atlas moth have extended lobes with markings that resemble the heads of cobras. The insect’s name in Cantonese even translates to “snake’s head moth”. If threatened, the moth will drop to the ground and wriggle its wings in a manner that some scientists believe may cause the tips to resemble agitated snakes, thus distracting or deterring a predator.

Moths and butterflies have four wings, though the upper and lower wing on each side are held together so that they seem to be one. Their wings are actually transparent like those of other insects, but they are covered with thousands of tiny colored scales.   Each of an Atlas moth’s four wings has a translucent, triangular window where these scales are absent. The exact purpose of these clear areas is not known, though they may help to break up the creature’s shadow, making them harder to spot. 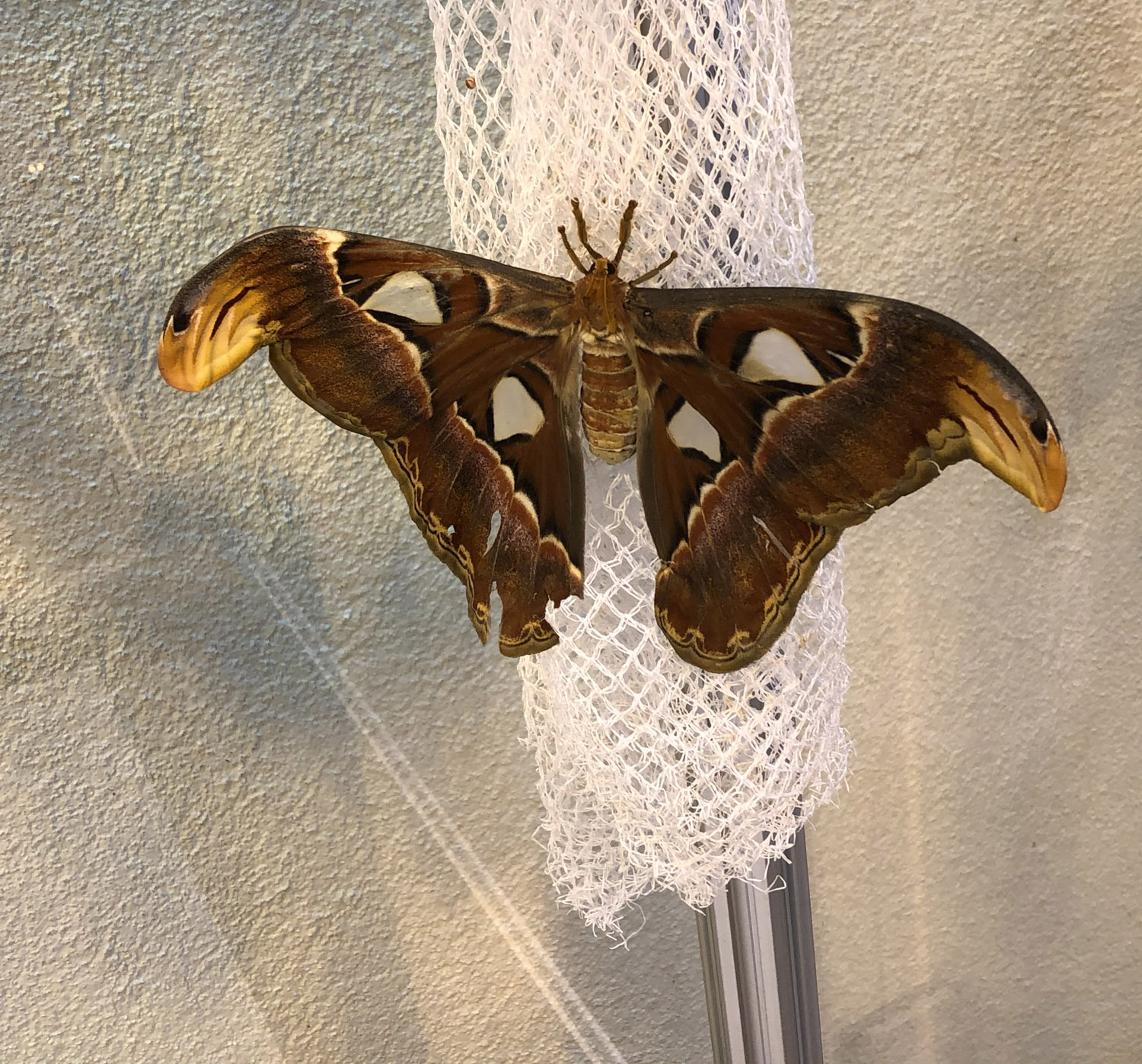 Another feature that distinguishes moths from butterflies is that the former wrap themselves in cocoons of silk when they metamorphosize from caterpillars to adults. Butterflies do not make cocoons, instead transforming inside a chrysalis formed from the caterpillars’ own hardened exoskeleton. The cocoons of Atlas moths are made of broken brown silk fibers called fagara, and are so strong that local peoples often use them as coin purses once the adult moths have emerged. 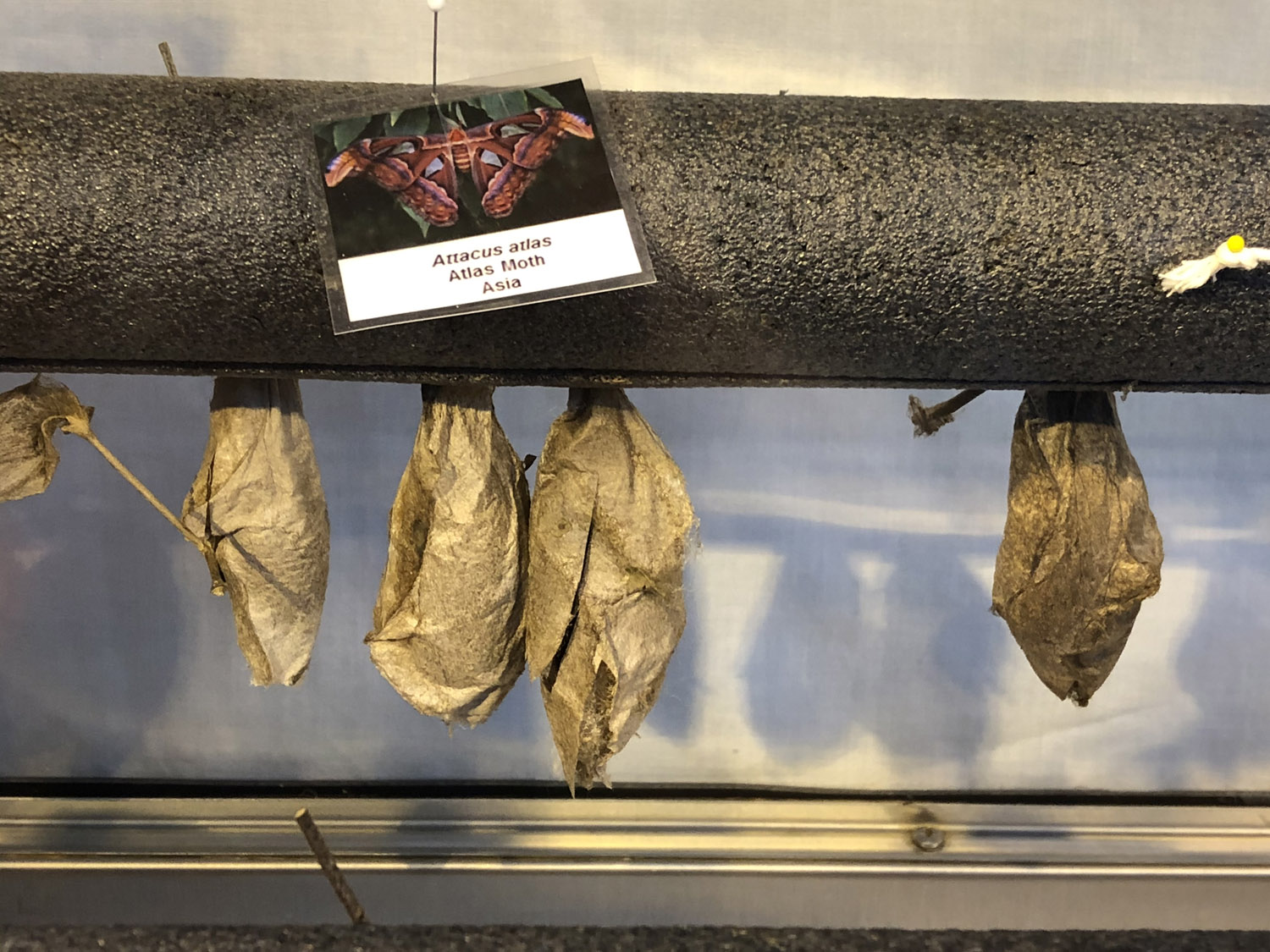 The Butterfly Encounter is a living exhibition that offers a unique experience every time you visit. From the variety of tropical plants and insects to the charming button quail, this unique attraction is a tropical oasis any time of year. For information and hours, please visit CTScienceCenter.org.