Like the number Pi, his influence lives on FOREVER

Close your eyes.  Block out all of the noise around you.  You know the noise: social media, earbuds, TV, radio, telephone and more.  Now that you’ve quieted your mind, imagine an original idea and wonder if anyone else in all of civilization is pondering the same thought.  This was the way of the world circa 1650-1600 BC. Yes, there were civilizations, the Babylonians, Egyptians, and Chinese, all unbeknownst to the other, thinking about an original idea related to circles.  They were focused on how to measure the circumference and area of circles. 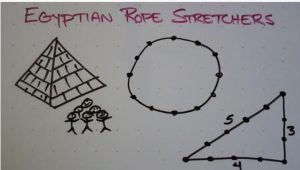 Around 250 BC, a brilliant mathematician by the name of Archimedes of Syracuse became interested in an idea developed by his compatriots a hundred years or so earlier.  The idea, called the Exhaustion Principle, would use principles from geometry, trigonometry, and calculus. These principles had yet to be printed in a mathematics textbook nor had they been established as areas of mathematics.  He would be the first to theoretically calculate the digits of Pi.

Archimedes envisioned a hexagon inscribed within a circle with radius ½.  The formula for circumference is 2πr. 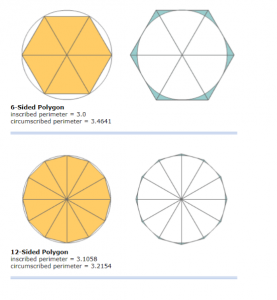 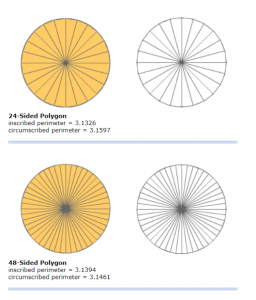 His brilliance as a Mathematician became apparent as he derived an algorithm that would enable him to use the first polygon with n-sides to calculate the perimeter of the second polygon with 2n-sides. This was the critical step that would differentiate Archimedes’ method from those who proceeded him. He continued visualizing the doubling of sides. He went from a 12-gon to a 24-gon to a 48-gon and finally to a 96-gon.  As he did this, the area between the perimeters of the inscribed and the circumscribed polygons was nearly exhausted and there was little differentiation between the perimeter of the polygons and the circumference of the circle. 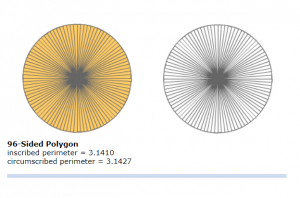 Through imagination (yes, mathematicians are imaginative) and tedious calculation, Archimedes’ range of values grew closer and closer to the circumference of the circle otherwise known as Pi. It has been reported that he calculated the value of Pi (3.14159265…) to be between 3.1408 and 3.1429.  Not bad for someone who did not have a textbook of formulas handy nor a computer or a TI-84 calculator.

It would be hundreds of years before anyone would expand on Archimedes’ work.  Eventually more formulas would be developed over time (centuries) and precision would be dramatically improved through the use of technology.  The use of supercomputers can now calculate Pi out to trillions of digits. These calculations are used to demonstrate the power and accuracy of machines.  Mathematicians have also continued to search for patterns within the digits that have been calculated, but thus far have found none. While many have contributed to the calculation of Pi over many centuries, it is the imagination, intelligence, and fortitude of Archimedes that has set them on their course.

As you celebrate National Pi Day, March 14th (it is a Congressionally approved national holiday), this year, visualize the inscribed and circumscribed polygon of the pie you are about to eat.  Give a shout out to Archimedes and slice a little piece of Pi in his honor. 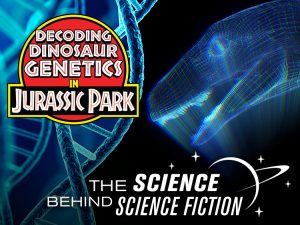 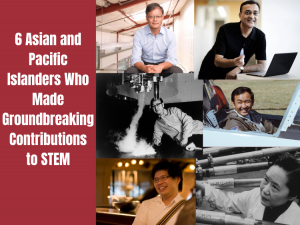