When I read Jurassic Park for the first time in 8th grade, genetics came alive. Just like the moment in the 1993 film where Dr. Grant and Dr. Satler first saw their fossilized dinosaurs come to life on the island, I saw just how interesting genetics could be. A few years later in my high school forensics class, my teacher recommended the book The Science Behind Jurassic Park, which details the challenging task of theoretically creating a dinosaur through the real-life techniques of genetic engineering. Seeing how incredibly challenging and interesting genetics was in this book fueled my interest to pursue science as a career. 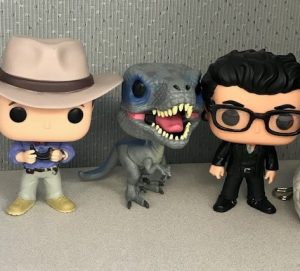 Now, as a graduate student studying science communication, I have a greater appreciation for the impact that Jurassic Park had when writer Michael Crichton communicated genetic engineering in the 1990s and made genetic technology a mainstream topic. Jurassic Park was one of my first sparks of inspiration in science (I even collect the FunkoPop versions of the characters from the movie on my desk), and still remains one of the most popular science fiction franchises  in pop culture. In this segment of ‘The Science Behind Science Fiction’, I’ll revisit my favorite science-related scenes from Jurassic Park and explore the genetic science behind them. 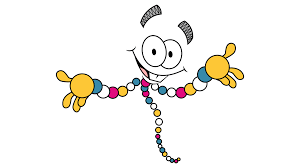 When characters Dr. Grant and Dr. Satler first arrive on the island they see their first living dinosaur, but after they marvel over brachiosaurus moving in herds, the main question on everyone’s mind is “How did they do it?” In order to explain to both the visitors of the park (and the audience watching the movie), Jurassic Park created a video that explains how they brought dinosaurs to life. This video features Mr. DNA, an animated cartoon DNA character, who explains what DNA is, how dinosaur DNA was found, and how they used it to create living dinosaurs. In the film, Mr. DNA highlights that DNA can be found in your blood and is the blueprint for all living things. But how can you find  million-year-old dinosaur DNA? Mr. DNA presents the oversimplified statement, “You just have to know where to look.” The theory was that millions of years ago, mosquitoes fed on the blood of dinosaurs, traveled to a tree, and got stuck in the tree sap. When the tree sap fossilized to become amber, modern day scientists can drill through the amber and extract the DNA. Sounds all too easy, right?… except for the important complication of DNA decay.

DNA has a shelf life-a decay rate of about 521 years, where half of the DNA bonds would be degraded, and then half of the remaining bonds would be degraded after another 521 years. This means that after 6.8 million years, all the DNA bonds would be completely destroyed, and 80-million year-old dinosaur DNA would not survive. Jurassic Park acknowledges this decay process but asserts that there are holes in the DNA sequence that need to be filled in order to have a complete genome to clone a dinosaur. To solve this theoretical problem, DNA from a frog is inserted into the sequence to fill in these gaps, like fitting in a missing puzzle piece. In reality, the DNA would be so far decayed that there would not be enough of the DNA sequence left to simply fill in the gaps.

LYSINE IS MY FAVORITE AMINO ACID.

Yes, I am the nerd who has a favorite amino acid. In Jurassic Park, ‘The Lysine Contingency’ is a genetic alteration that fictional geneticist Dr. Henry Wu created in the dinosaur genome that prevents the dinosaurs from producing the amino acid lysine. In real life, lysine is an essential amino acid. This means that your body needs lysine for proper healthy functions, such as building proteins, absorbing calcium for bone growth, and lowering cholesterol. However, your body does not make lysine on its own, thus it is essential that humans get lysine from their diet, by eating lysine-rich foods, such as beans, meat, eggs, and cheese. 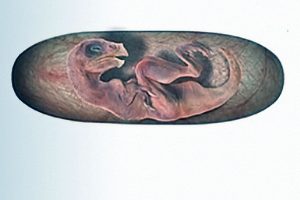 Shortly after learning how the dinosaurs in Jurassic Park were created, we’re in the lab watching a baby velociraptor emerge from its egg. As the egg shell shows the first signs of hatching, Dr. Henry Wu mentions that all the dinosaurs in Jurassic Park were specifically designed to be female to prevent any unauthorized dinosaur breeding outside of the lab. He claims that all vertebrate embryos are female to begin with, then just require an additional hormone to become male, which Jurassic Park scientists prevent. This aspect of developmental biology is actually still a current source of debate. For a long time, continuing through the 1990s, scientists believed that embryos had this female “default setting.” More recent studies have found that embryos initially contain both male and female reproductive tracts. While we don’t know the specifics about dinosaur embryonic development, fossilized dinosaur embryos have been discovered, including one oviraptorosaur found in China nicknamed Baby Louie, that have suggested dinosaur embryos’ fast growth rate inside the egg.

When Dr. Grant and the children get lost in Jurassic Park after the T. rex attack, they stumble upon pieces of broken eggshells–proof that the dinosaurs were breeding outside of the laboratory. Dr. Grant then remembers that they filled the holes in the dinosaur DNA with DNA from a frog and that some frog species from West Africa can change sex in single-sex environments. This sex-change mechanism exists to ensure the survival of the species, if one sex ends up being eliminated or in short supply. In the 1980s, a study was published that suggested the Common reed frog, Hyperolius viridiflavus, from West Africa could change sex from female to male. However, the process of changing sex, which has been observed in many animals such as frogs, snakes, slugs, and fish, involves a number of different molecular mechanisms and environmental factors.

Many scientific discoveries inspired the creation of the Jurassic Park franchise.The film also introduced genetic engineering to the public in an understandable and entertaining way, even though they sometimes stretched the boundaries of scientific fact. Keep an eye out for new scientific discoveries in the news and see how it changes your perspective of your favorite science fiction movies.