With the help of two robots, the Connecticut Science Center cut the red ribbon and welcomed its first customers on opening day ten years ago, June 12, 2009. 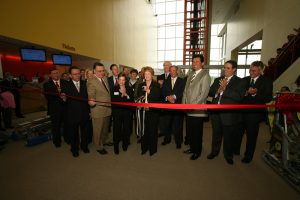 The Connecticut Science Center has a rich history spanning from the initial conceptual designs and building construction to the development of educational programing, scientific initiatives, and the continued improvement of creating engaging science content. In celebration of our tenth anniversary, we look back at the events that have shaped the growth of the Connecticut Science Center in our 10th Anniversary Timeline.

Recognizing the need for science literacy and a new attraction in downtown Hartford, the idea of a science center was a dream of many corporate and civic leaders in Connecticut for nearly 20 years. In 2000, consultants recommended a science and technology attraction as among the best options for renovating downtown Hartford. In 2001, the Science Center was founded as the “Connecticut Center for Science & Exploration”, and immediately upon its founding, a core team of supporters embarked on an extensive planning process to create a new educational destination at Hartford’s Adriaen’s Landing.

In December of 2003, a Board of Trustees was established, Dr. Theodore Sergi was selected as the founding President and CEO, and significant state funding was authorized to formally begin the work of building the Science Center. 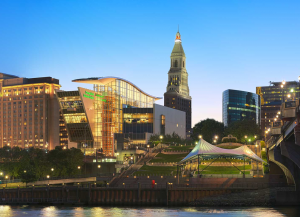 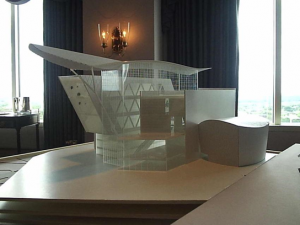 At this point, the people and pieces of the Science Center were finally starting to take shape, but there was one thing missing: the building. From 43 candidates, four talented architects, Saha Hadid, Moshe Safdie, Cesar Pelli, and Benisch, Benisch & Partner, were tasked with proposing design plans for a science center.  In September 2004, world-renowned architect Cesar Pelli was chosen to design and construct the 144,000 square foot building. With its open atrium and magic carpet roof, Pelli said the building communicates “the excitement of science to the surrounding streets, river, and highway…appearing to reach out beyond their physical limits.” 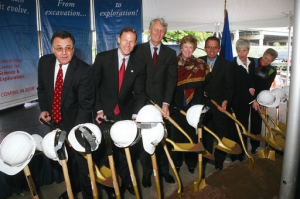 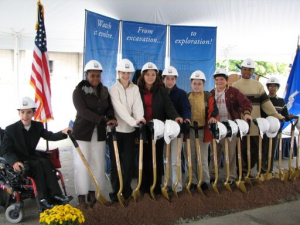 With the design plan envisioned, the massive construction project to turn a parking lot into a state-of-the-art science center began in October 2005 at the groundbreaking ceremony. Dr. Theodore Sergi, senator Richard Blumenthal, former governor Jodi Rell, and others joined local children, picked up their shovels, and illustrated how the future Science Center would be a place that brought people together over curiosity and interest in science. 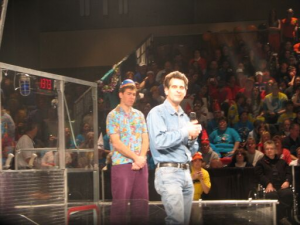 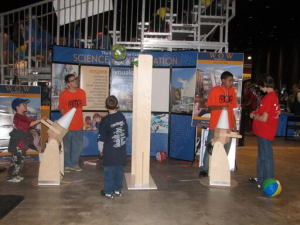 Over the course of the Science Center’s three year construction process, there was no delay in the work happening behind the scenes as staff members developed educational programs, events, and exhibit designs long before the first visitors arrived. One such outreach program was the FIRST (For Inspiration and Recognition of Science and Technology) robotics program in 2006, in collaboration with inventor and Science Center Trustee Dean Kamen. During this time the Board of Trustees also adopted a new name and logo, which remains to this day, the “Connecticut Science Center.” 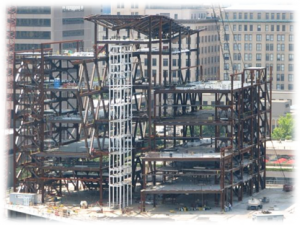 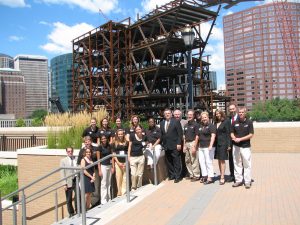 In 2007, the metal skeleton of the Connecticut Science Center began to rise to join the iconic Hartford skyline. The moment was celebrated in a “topping off” ceremony, as the roof was transported and placed on top of the building. In April of 2009, a few months before opening day, Dr. Theodore Sergi retired and Matt Fleury succeeded him as the President & CEO of the Connecticut Science Center. 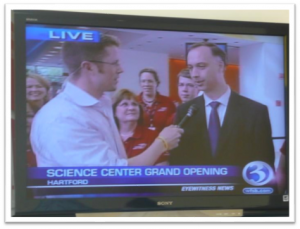 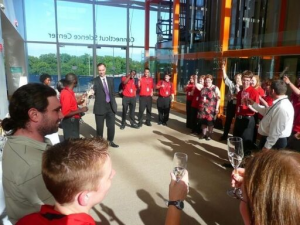 June 12, 2009 marked the culmination of the construction project as the Connecticut Science Center opened to the public with over 150 exhibits such as Sight & Sound Experience, Invention Dimension, Planet Earth, River of Life, and 3D-movie theater, featuring films on dinosaurs, the sun, and ocean wildlife. 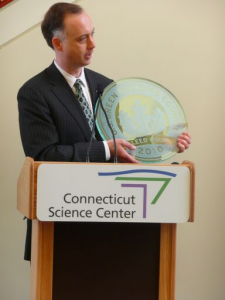 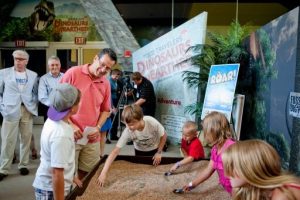 In just three months after opening, the Connecticut Science Center had welcomed visitors from every city and town in Connecticut. Since then, the Science Center has continued to introduce new and updated traveling events and permanent exhibits, such as the opening of the rooftop garden in 2012, and many notable exhibits such as Dinosaurs Unearthed in 2012, Energy City in 2014, Extreme Dinosaurs and Wild Music in 2015, Leonardo Da Vinci: Machines in Motion in 2016, and many others.

In addition to the many hands-on exhibits, the Connecticut Science Center has furthered its mission with a number of initiatives, such as Celebrating Women in Science in 2013, Science Forward in 2014, and the introduction of the Andrew J. and Joyce D. Mandell Academy for Teachers in 2013. 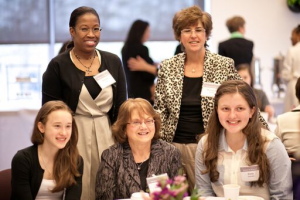 The Celebrating Women in Science initiative started as a series of programs and special events to highlight the accomplishments of women in science and inspire young girls to pursue their STEM interests. The spirit of this initiative continues to this day with Women in Science Saturday events and yearly STEM achievement awards. The Science Forward initiative aims to develop facilities and enhanced programs related to engineering, life sciences, and human impact. These improvements will support all visitors by providing accessible, hands-on activities as well as provide educational programs that complement science curriculum standards. 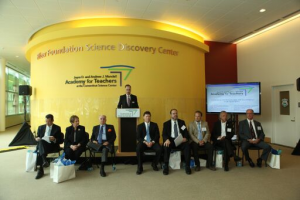 The Mandell Academy for Teachers grew from a long standing relationship between educators and the Science Center in developing effective science practices for instruction and strategies for implementation. As Connecticut adopted the Next Generation Science Standards (NGSS), a set of content expectations that K-12 students should understand about science, the Mandell Academy and the State Department of Education developed workshops in professional learning to ensure accomplishment of these standards in an immersive and engaging manner. Since opening in 2013, the Mandell Academy has developed numerous training workshops and traveling science programs, and continues to inspire teachers to bring science to life in the classroom. 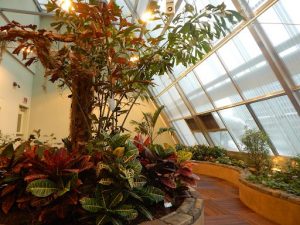 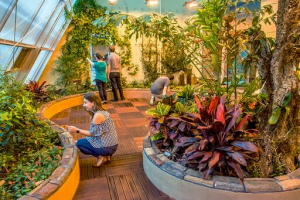 In 2017, two exhibits changed the landscape of the Science Center experience: the Butterfly Encounter and Science Alley. The Butterfly Encounter exhibit features a year-round tropical habitat with 40+ species of free-flying tropical butterflies and 30+ species of plants. This living exhibit is constantly growing and increases awareness of global conservation efforts for butterflies to improve forest restoration. Science Alley is located in the new remodeled atrium designed to explore the unseen elements of the earth’s greatest wonders, from the bottom of the deep sea, volcanoes, and the outer reaches of space. Each of these models shows us the inner workings of the whales, helicopters, volcanoes, and other giants to give viewers a glimpse into the range of scientific discovery. 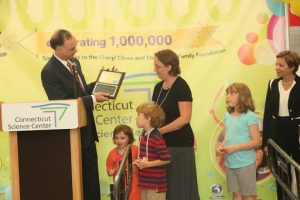 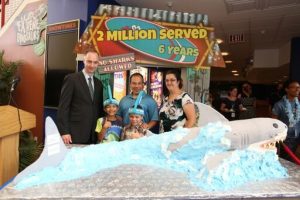 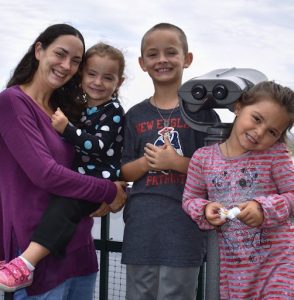 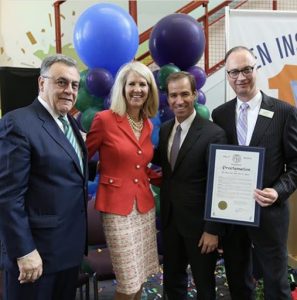 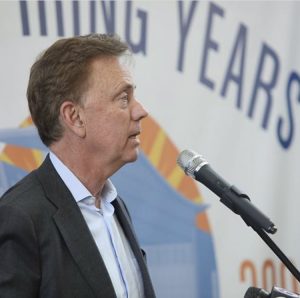 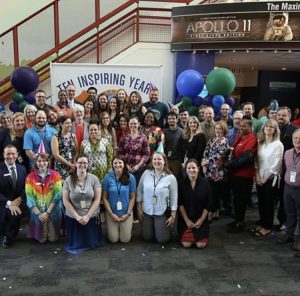 On June 12, 2019, the Connecticut Science Center celebrated ten inspiring years with a celebratory moment shared with friends, trustees, and visitors with remarks from Governor Ned Lamont. This moment kicks off a year-long celebration that includes strategic initiatives, new exhibits, special events, and programs to further our mission and adapt to the changing needs of science education to support a future diverse STEM -trained workforce.