All of us have a mental picture, or model of how a piece of technology works when we’re using it, whether we’re consciously thinking about that model or not.  Sometimes that model is completely incorrect. 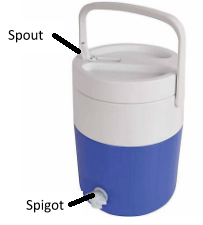 One day I was trying to get water out of it, but when I pressed the button on the spigot, nothing happened.  I shook the cooler—yeah, there was definitely water in there—then proceeded to mash on the button some more like I was trying to make an elevator go faster.  I might’ve kept fruitlessly mashing away, but a friend came by and helpfully pointed out that the spout on the top of the cooler was closed.  Once the spout was flipped open, water started flowing out the spigot.

Without realizing it, I was operating the water cooler with the idea that all I had to do was press the button and water would be released.  Air played no role in this mental model.  In reality, air pressure from outside the cooler was pushing on the water, holding it in the cooler even though the button was pressed down.  Only once air could flow through the spout from above and push down on the water would it come out of the spigot.   (With a water bottle and a tack, science teacher Jared Hottenstein explains in 2 minutes how air pressure keeps water in a container when there’s a hole in it.)

I had learned about the effects of air pressure before my encounter with the water cooler, but despite my background knowledge, I was using the wrong mental model.

So why did this wrong model win out?

In his book Thinking, Fast and Slow, psychologist Daniel Kahneman describes two systems of thinking: “System 1” is automatic, effortless thinking, like how we come up with the answer to 2 + 2. “System 2” on the other hand kicks into gear when we’re doing tasks that require concentration, like following a logical argument, or solving 17 x 21.  Well, if System 2 is so great, why don’t we use it all the time?  There’s a catch: using System 2 requires more work.  To conserve that precious mental energy, our brains default to using System 1 whenever possible.

When I was trying and failing to get water out of the cooler, I was using System 1: see button, press it and contraption should work, right? System 1 works just fine for figuring out how to use lots of modern technology—after all, they’re purposefully designed for simple interactions.  We don’t have to expend any mental energy to know how to adjust the temperature on a thermostat or change channels on the TV.  We’re so accustomed to these simple interactions with technology that we can be forgiven if our instinct is to expect that when we press a button on a device, it will immediately do what we want it to do.

But this convenience comes at a price; when the complexities of a technology are masked with a simple interface, we can be blind to the science concepts that make those technologies possible.

As frustrating (and perhaps a little embarrassing) as it may be, getting perplexed by a piece of technology is a fantastic opportunity to kick System 2 into gear, spend some mental energy, and edit that mental model.

When I flipped up the spout of my cooler and water began to flow, I could visualize air molecules entering the spout and pushing down on the water, forcing it through the spigot. I had formed a new mental model that could better explain what was happening.

Reasoning through what I was doing wrong with the water cooler was great practice for gaining a more intuitive and effortless understanding of not just this particular piece of technology, but any technology where air pressure plays a role, from vacuum cleaners to syringes.

Our mental models are the lenses through which we see the world.  So the next time you’re having trouble with a piece of technology, don’t worry—it just might help you see the world a little more clearly.

The Connecticut Science Center is now open Tuesday-Sunday 10AM-5PM. Timed tickets must be reserved online in advance of your visit. Reserve your tickets by visiting CTScienceCenter.org.