Is there a better way to celebrate the opening of the Connecticut Science Center’s “Our Changing Earth” exhibit than to plunge right into the hard stuff and explore climate change? With a little levity, that’s exactly what we did at Science Straight Up, the adults-only happy hour event.

Because I’m still an eight year-old at heart, my favorite memory from the evening was playing with worms. “Red Wigglers” sounds cuter than Eisenia fetida; whatever you call them, the earthworms excel at breaking it down — “it” being organic matter.

Why does that matter? According to the EPA, “Municipal solid waste (MSW) landfills are the third-largest source of human-related methane emissions in the United States, accounting for approximately 14.1 percent of these emissions in 2017.” Emissions are produced as a byproduct in the decomposition of organic matter — think food waste, leaves, and lawn clippings. What a waste! Composting reduces methane emissions while improving soil quality. Red Wigglers expedite the process of decay.

There is not always room to have large outdoor compost bins when living in a city, but a worm bin can fit in small spaces and does not create an odor. As easy as it is to maintain Red Wigglers, a studio apartment or overly picky roommate might dash your dreams to start vermicomposting. Now what? 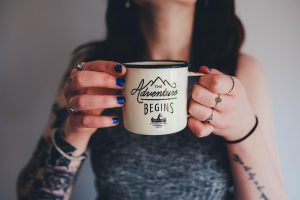 Photo by Annie Spratt on Unsplash

While walking by the enormous simulated ice ledge in “Our Changing Earth” might make you feel small, the new #21DayEarthChallenge that launched at Science Straight Up offers a chance to feel more substantial. Missed Science Straight Up? You can still play along at home. Pick one of these activities and practice once daily for the next 21 days:

There are endless actions we can take on a personal level to slow the rate of climate change. Instead of getting overwhelmed with all these possibilities, pick one thing and start there. Which habit would be most meaningful to you and is one you could practice daily?

Before you start, you’ll want to do some minor prep. If you were at Science Straight Up and committed to trying the #21DayEarthChallenge, you received a tote bag. Now all you need to do is remember to take it with you in the morning. Substituting reusable beverage containers for the standard throwaways? You probably already have a freebie water bottle or mug in the back of the cupboard. If you are going to be walking as part of a multimodal (bus or train, plus walking) commute, check out the CTrides transit rewards program that offers discounts at participating restaurants and cultural venues. Not all work dress codes are equal, so if you are expected to wear shoes in the office, consider stashing them at your desk to change into when you arrive. Don’t let uncomfortable footwear interfere with your goals!

For the next 21 days, I will also be trying to form a new habit. Kate Saulsbery-DeFelice’s coffee cup demonstration at Science Straight Up drove home what I already understood abstractly — waste adds up! Kate explained that if you drink one venti (20 oz.) iced coffee from Starbucks every work day for one year, you are tossing out 5.46 kilograms of waste, which equals just over 12 pounds, or the equivalent of two Chihuahuas.

My coffee intake has never reached Lorelai Gilmore heights, but it is in my life daily, including weekends. Espresso-based beverages spark joy; the single-use cups they are delivered in do not. I will be attempting to switch from disposable to reusable beverage containers, and this process will be documented here on Down to a Science.

Remember: to boost your chances of forming a new habit, it helps to tell others what you intend to do. Use the #21DayEarthChallenge on your Facebook, Instagram, or Twitter posts and tag the Connecticut Science Center.