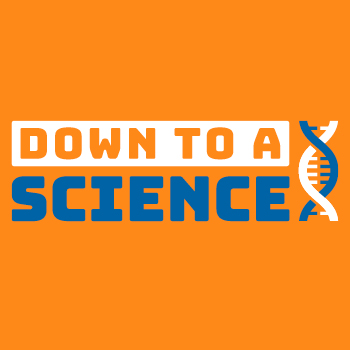 The question is as old as the space program itself: what is the point of sending humans into space? Not everyone has been an enthusiastic supporter of manned spaceflight. Speaking about the Apollo moon program, two-time Nobel prize-winning chemist Linus Pauling had this to say: “It is a pitiful demonstration…For the same investment, it would be possible to answer 1,000 interesting questions about the human body for every one question answered about the moon.” Does he have a point? What is the true value of humans exploring space? 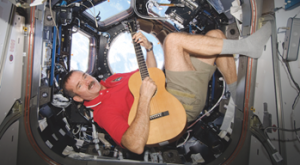 One thing is for sure: space exploration gets expensive. If a person is going to attempt space flight, he or she will need air, food, water, companionship, room to stretch, maybe an acoustic guitar to stave off the space station blues—and when it comes to sending stuff to space, extra baggage can really cost you. Here’s a breakdown of the price tag to pack certain things in your astronaut suitcase when visiting the International Space Station: Lemons…$2,000 each. Bottle of water… between $9,000 and $43,000. Espresso machine… about $2 million. Perhaps Chris Hadfield could’ve made do with a harmonica.

Alternatively, we can just send a robot into space. But what can a robot discover without a human handler nearby? Quite a lot, actually. Nestled aboard the Mars Reconnaissance Orbiter is CRISM (Compact Reconnaissance Imaging Spectrometer for Mars), which can split light reflected off Mars into a prism of colors, allowing scientists to identify minerals all across the surface without ever so much as picking up a pebble. That’s just the beginning. Robots can be programmed to independently operate seismographs to investigate the internal structure of planets, use radar to map subsurface ice deposits, and even to use special equipment to detect the presence of extraterrestrial life. And all robots need are batteries.

So again, we ask: what is the point of sending humans into space? Why send a person when a robot can do what humans do, and a whole lot more, for way cheaper? Well, let’s consider this: can a robot describe the feeling of weightlessness as it rises up through the blue of our atmosphere to the blackness of space? Can it share the sensation of standing on a desolate lunar surface, looking back on the beauty of Earth? No and no. Only humans can pass on stories to each other, and stories are what society craves. It’s no coincidence that we feature human characters in our science fiction alongside robots. As fun as they are, Star Wars would be a lot less interesting with only R2-D2, C-3PO and BB-8 doddering and rolling around.

It’s easy to forget that space doesn’t have to be just a place to study, but to experience. As Neil Armstrong said, “A picture does a great job, but it’s not nearly like being there.” People want to go to space for the same reason people climb Mount Everest or ride submersibles to the depths of the ocean: because testing our limits fires up the imagination. It’s exciting. It feels good. Odds are you’re going to find plenty of kids who’ll say they want to be astronauts when they grow up.

So the question that we should ask isn’t “Why should we send people into space?” Rather, it needs to be: “Should we keep people from going to space?” Do we declare outer space off-limits to humans because of its gargantuan expense?

Merits of such a policy aside, it’s worth noting that humanity doesn’t have a great track record of keeping people out of places. No wall has ever been built that someone hasn’t scaled. When we have the urge to go, we’ll find a way to get there. And barring that, we’ll devote resources to help someone else go. It’s not a single person’s decision that NASA has a manned spaceflight program; it’s the approval of constituents that makes it possible.

Even so, for all the money and effort humanity has spent in expanding its frontier, only 563 people out of 7 billion have ever journeyed into space. What can we gain other than stories from this tiny slice of the population? Well… we don’t know. When we first make a discovery or explore a new world, it’s impossible to say what potential lies ahead. After German physicist Heinrich Hertz detected electromagnetic waves in his lab in the late 1880s, he was asked about their practical significance. His answer was: “They’re of no use whatsoever.” These waves, by the way, form the basis for GPS, cellular technology, and the internet. Sometimes, by trusting our instinct to launch ourselves into the unknown, we chance upon a world not just under our feet but in our minds. The adventure stories can become thoughts, and the thoughts can become questions, and the questions can become scientific investigations. Robots may be good at helping us answer our questions, but they’re never going to ask them.

So I say we support this generation of space adventurers, cheer them on, and perhaps someday we will venture out there with them.

Looking to inspire your child’s interest in the STEM fields? The next STEM Career Connections Showcase is scheduled for November 13, 2019 at the Connecticut Science Center. 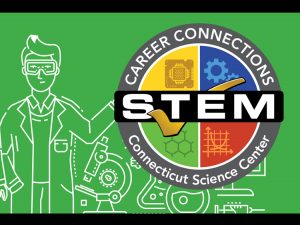 Paving the Way to STEM: Layers of the STEM Career Connections Initiative