While watching my favorite science fiction movies and TV shows, I’m often left with more questions than answers. Can we actually clone ancient animals like the dinosaurs in Jurassic Park? Does gamma radiation change our DNA, like the process behind The Hulk’s angry, green transformation? What are the quantum mechanics behind “Pym Particles” and the “Quantum Realm” in Ant-Man and Ant-Man and the Wasp? In this segment of Down to a Science, we introduce the ‘Science Behind Science Fiction’ series. We’ll take a deep dive into the science behind your favorite sci-fi books, movies, and TV shows.

The month of June has recently been dubbed on the internet as ‘Jurassic June,’ in honor of the release of Jurassic Park in June 1993. Dinosaur fans now have the chance to celebrate and appreciate all things Jurassic Park all month long. For our contribution to Jurassic June, Samantha Hall explores the science behind dinosaur behavior in Jurassic Park.

How do paleontologists figure out how dinosaurs behaved?

While watching Jurassic Park, two big questions crossed my mind: “Is this really how dinosaurs behaved?” And “If it is, how do we know?”  How do paleontologists figure out how they lived?

The method they use is called comparative anatomy, which refers to studying the similarities and differences between different species of animals.

Here at the Connecticut Science Center, the whale sculpture in Science Alley is an example of comparative anatomy because it shows the similarities between the bone structure in the whale’s fin and the human hand.

Paleontologists use comparative anatomy to compare living species to extinct ones. For example, we can hypothesize that a T. rex ate meat because its fossils have sharp teeth and the animals that we observe eating meat today also have sharp teeth.

Paleontologists also determine what we can’t see in the fossil record based on what we can see.  For example, we can hypothesize what a T. rex’s eye was like based on other characteristics we can see in its fossils that it shares with modern animals. Paleontologists think a T. rex eye would be similar to a crocodile or bird eye because a T. rex is similar to them in many other ways. 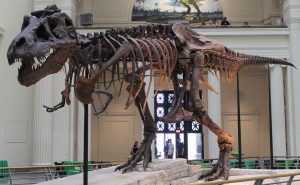 This technique is often used in combination with “biomechanical modelling.”  Fossils can be 3-D imaged and experimented with using a computer program. Scientists use this method to test the speed of dinosaurs by playing with the computer model to change the size of the dinosaur, the speed, and the muscle mass needed to keep the dinosaur from falling over. This is how paleontologists can be sure that a T. rex could only run about 11 miles per hour (mph), not 32 mph as the film Jurassic Park claims.

Which brings me to my original question – Is Jurassic Park a realistic portrayal of dinosaur behavior?  Based on the information known in 1993 when the film was released the answer is: yes and no. 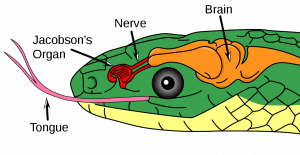 Jack Horner was the paleontologist the film crew turned to check their facts. For example, Horner prevented the Velociraptors from having snake like forked tongues because he knew they didn’t have Jacobson’s organs – an organ that snakes use to smell the air picked up by their tongues. Horner also informed the decision to portray dinosaurs moving in herds in the film, which was inspired by his own research on the social behavior of dinosaurs. 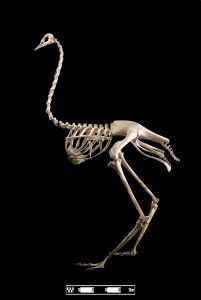 There were also a few areas where the movie took liberties.  The speed of the T. rex running 11 mph, not 32 mph, was one thing Horner could not talk the crew out of.  Horner used comparative anatomy to explain that the legs and hips of the T. rex are not similar to the fast two legged animals of today like ostriches, but the significance to the plot outweighed the need for accuracy. We also cannot be sure of the sounds dinosaurs made, but Horner hypothesizes that they would have been close to “low-pitched bird sounds” while the movie opted for slowed-down versions of a donkey braying and a baby elephant trumpeting.

Horner continues to be the go-to expert of all things dinosaur in the current Jurassic World films.  To learn more about how paleontologists study dinosaurs, and to find out if there are any dinosaurs still alive today, check out this VSauce video featuring actor Chris Pratt and Jack Horner himself.

Join us in celebrating Jurassic June this summer by visiting our Planet Earth exhibit. Hear our roaring Dilophosaurus and see real dinosaur footprints to learn more about dinosaurs and paleontology at the Connecticut Science Center!

Samantha Hall is the Membership Coordinator at the Connecticut Science Center.  She has a B.A. in Anthropology from Central Connecticut State University where she dabbled in digging in the ground and spent a lot of time learning about humans and cultures of the world. .