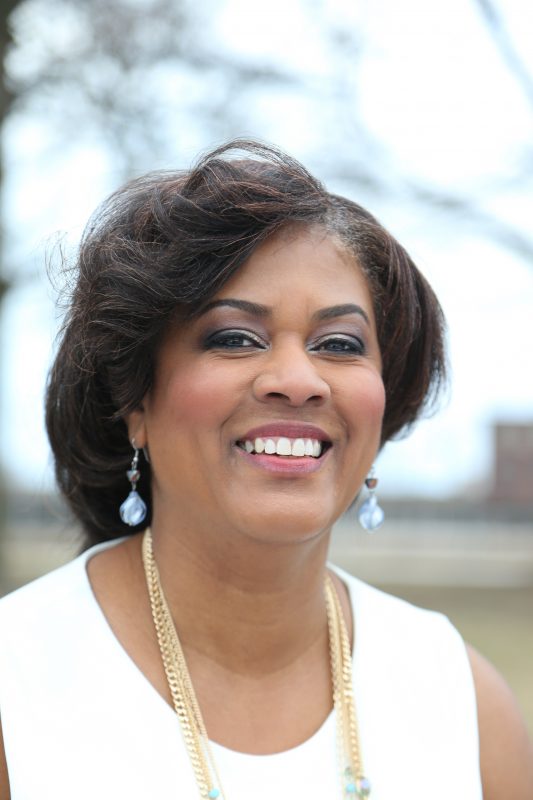 “Math is not just numbers,” Dr. Shelly Jones tells me over coffee.

It’s also patterns, and the patterns were what drew Shelly to math. By noticing patterns, she was able to find answers.

“I liked figuring things out — the puzzleness of math,” she says. “Not having the answer right away” is “the joy of doing math,” Shelly says, while acknowledging that some dislike math because of the process of getting to the answer.

Having teachers who made math interesting helped, but Shelly did not begin her path as a math major. As a young person, she was unsure of what career to explore. Her supportive parents, who she described as “instrumental” in her education, advised her to think about a career involving computers. At Spelman College she started with a double major in Computer Science and Computer Engineering. For a few reasons, “she didn’t stick with the engineering,” but her major required multiple math classes. There were aspects of programming that she enjoyed, but after a few years in the field, realized she was finding the job wasn’t fulfilling because she is too much of a people person.

She “fell in love with teaching people how to teach math.” Working with pre-service teachers at Central Connecticut State University, Shelly instructs classes on math methods. There is more to teaching math than just knowing how to do the math. She asks her college students to consider “What do these kids care about? What are they troubled about?,” and then, “mathematize it.” This “may mean that teachers have to learn more about their students,” she said.

In her TEDxTalk, Shelly shares how kids should be taught from a “culturally relevant perspective” and empowered to challenge the status quo. She refers to an article by Erin Turner and Beatriz Font Strawhun that illustrates how investigating authentic problems increases understanding and engagement. Overcrowding, Shelly explains, is one such problem. Students may know that a routine visit to the restroom can make them late to class, but have they thought about how math figures into this? This is an opportunity to calculate the area of the girls’ restroom at school. Culturally relevant instruction can fulfill Common Core requirements while helping teachers “not get into a rut,” she explains.

“Math is cultural,” Shelly says. In her “Math and Diverse Cultures” class she shares how math is used differently around the world, from Ecuador to the Marshall Islands, from the Egyptians to the Mayan.

Increasingly, humanizing math is important. This is at the heart of her children’s activity book, Women Who Count. “It’s about the math,” she says, “but it’s also about the people.”

A friend, Sara MacSorley, told her about the book Hidden Figures, which Shelly researched before reading. After seeing the movie, Shelly was inspired to create her book: 29 bios of African American women, all of whom started off as math majors. She was surprised to see how much variety there could be in career paths among those with the same degree. The book, about to go into its second print run, contains math activities she enjoys, like tessellations, but which may not be included in the Common Core, and therefore, not required to be taught in school.

Besides teaching college students and writing a book, Shelly sometimes teaches youth. She put together a Bingo game with math vocabulary and names of the Mathematicians in her book. Older kids have to come up with the term after being read a definition, but the younger ones are told both the clue and answer. Just getting more exposure to terminology is a way to plant seeds.

For those interested in STEM, Shelly suggests that they “find other people — other peers — that are like-minded for support.” She alludes to Beyond Banneker: Black Mathematicians and the Paths to Excellence by Dr. Erica N. Walker: of the mathematicians Walker interviewed, all of them had someone who told them specifically “You’re good at math,” and then when they were college-aged, someone told them what they could do with a math career.

In short, Shelly says, this means that young people need to “find your own mentor” if you have to, because “sometimes you have to do your own research.”

“For people already in the field,” she advises, “look for students who might have an interest,” even if they are not in the top tier. Look for the students who “don’t give up” and who have “habits of mind,” reach out, and then show them what they can do.

Know an amazing woman working in STEM who deserves recognition? The Connecticut Science Center is accepting nominations for the 2020 Women in Science Leadership Award through February 7, 2020. Honorees will be celebrated at the 2020 STEM Achievement Awards Breakfast in April 2020.