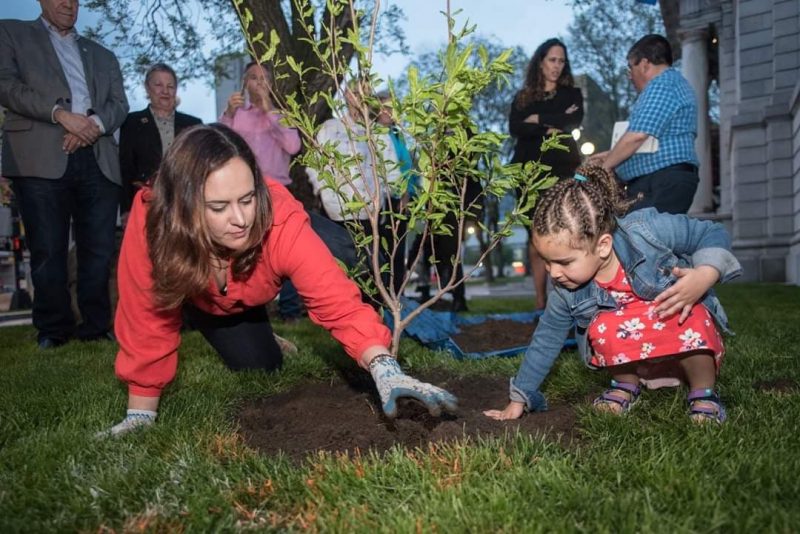 Heather Dionne, with help from her daughter, plants a tree

Heather Dionne recalls feeding animals on her uncle’s farm in Ashford, Connecticut. Her curiosity was encouraged by her uncle, who let her help drive his tractor and Bobcat. Today, as a mother, she says it is important to let her child be “inquisitive and explore.”

Curiosity and the influence of mentors is in part responsible for how Heather got to where she is today, spending part of her days up in trees, working as the City Forester for Hartford.

The job is not always easy. Following the recent Halloween storm, Heather spent 24 non-stop hours inspecting scenes all over Hartford where trees fell across streets and in parks. Drought and the emerald ash borer has already weakened much of the urban forest, and it took days to clear damage from this recent windy night.

But, she says, “if there’s something you find rewarding and your soul wants to do it, you got to keep going.”

To get here, Heather needed training. She traces her interest in forestry back to her “awesome” high school biology teacher, who also served as an Envirothon coach. He had a “phenomenal ability to connect people with science,” Heather said. When they started talking about trees, she was hooked. He noticed this and encouraged her independent study on sassafras trees. From there, he suggested she apply to Unity College in Maine, which specializes in environmental studies. She took care of her first two years of study at Eastern Connecticut State University, then transferred to Unity College. There, she took a “tree-climbing class” and joined the Unity Woodsmen Team, which she described as “so much fun.”

Much of her education took place on the job. She interned for Augusta, Maine’s city forester, then took a private tree care job. At the latter, she picked up skills for working in the bucket truck. Something she realized was that buckets were not necessarily built with the average woman in mind. To manage this, she asked a carpenter to make her a step stool. Modifications, she said, are sometimes going to be necessary when working in a male-dominated sector.

Other on-the-job lessons included how to rig trees, run lines from the ground, and grind stumps. She learned how to document tree code violations. At another job, she gained experience writing grants. In her current role, she benefits from having accumulated a range of skills. Her day-to-day work requires that she manage a crew and contractors, make recommendations about the budget, talk with homeowners about trees, create a “recommended tree” list, try proactively to keep the public safe, and educate about the benefits of trees. Some days, she gets to use her chainsaw, which she stores in her office.

These days, Heather is trying to wrap her head around climate change, for which she says “trees are such a simple solution.” Getting people to view trees as an “asset” that “need to be maintained, managed, and protected” has been a challenge, but she thinks more folks are understanding this than before. “This has to be a priority now,” she said.

For girls and young women interested in forestry, Heather says that being in a male-dominated environment does mean you may have to work ten times harder, and suggests they tell themselves “I have every right to be here, just like you,” but at the end of the day, it’s a rewarding job. Heather credits mentors like former bosses and Chris Donnelly with the DEEP’s Urban Forestry Program for helping to cut her own path.

The Connecticut Science Center’s Women in Science initiative encourages girls and young women to pursue studies and career paths in science, technology, engineering, and math (STEM) and celebrates the achievements of women in the sciences. Visit the Women in Science page to learn more about upcoming events and programs.