Down to a Science Book Club, Junior: Grandmother Fish 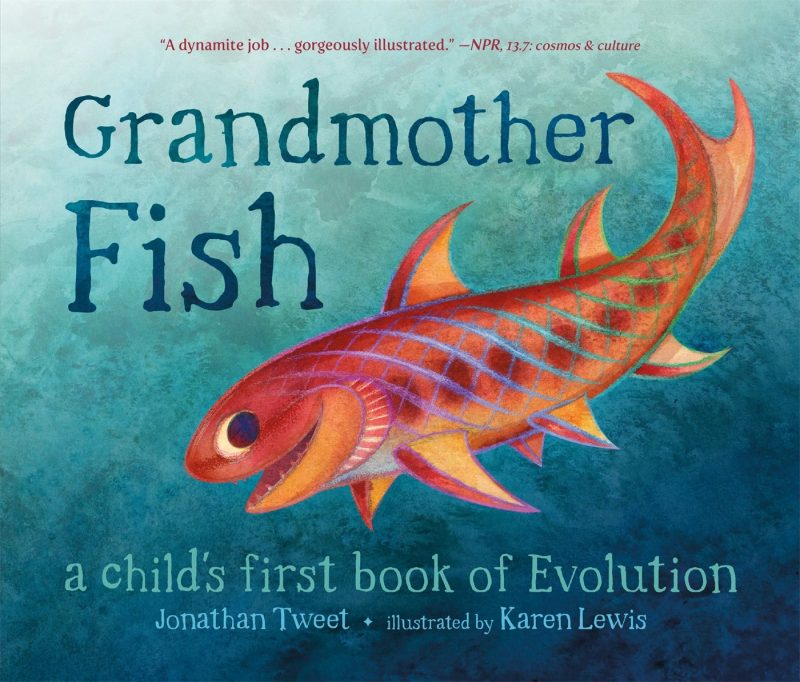 Evolution can be a tricky subject for kids to understand, especially when it comes to concepts like the vastness of time and the slow, gradual changes that life undergoes. Such ideas often don’t seem to make intuitive sense, so what can a scientifically-minded parent tell their children when they ask why dogs and monkeys have fur but birds do not? Or why fish can breathe water but people can’t? Or even something as basic as “where did animals come from?”

The picture book Grandmother Fish is a good place to start. Written by Jonathon Tweet and illustrated by Karen Lewis, the story presents basic evolutionary concepts to readers aged 3-6 in a simple, fun style that encourages interaction.

Karen Lewis’ bright, clean illustrations show that evolution is not a linear path but a tree. Grandmother Ape, for example, gives rise to Grandmother Human, but she also leads to Cousin Gibbon, Cousin Chimpanzee, Cousin Gorilla and Cousin Orangutan, each at the end of their own distinct branch. Though Lewis’ creatures are stylized, they are biologically accurate enough to satisfy the standards of even the most discerning paleontology-obsessed child (and every parent knows at least one of those).

Grandmother Fish is meant for young children, so the concepts are very simplified. An older child might ask why everything only branches from “grandmothers,” or how far back a long, long, long time ago actually is. For kids looking to explore farther, the book features an appendix explaining more advanced ideas like descent with modification, and natural versus artificial selection. It also discusses common misconceptions about evolution such as the idea that animals change into new forms or that evolution’s ultimate goal is the development of the human form. A two-page spread introduces readers to a streamlined Tree of Life starting with eukaryotes, bacteria and archaea and moving through the various kingdoms of life, showing each Grandmother Animal as a base from which numerous lineages branch.

You can get a copy of Grandmother Fish on Amazon or order it from your local brick-and-mortar bookstore.

If you and your children would like to learn more about how life and the planet have changed over time, come check out Our Changing Earth exhibit on the sixth floor and stay to see how animals have adapted to their environments at the River of Life exhibit.