Down to a Science Book Club: The Uninhabitable Earth 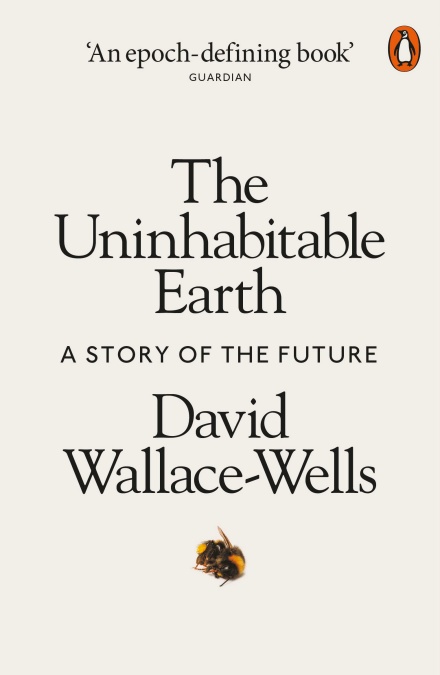 How do you get people to care?

That’s the question of the day when it comes to climate change. It’s asked by everyone from political organizers to authors like David Wallace-Wells, who grapples with this at length in The Uninhabitable Earth: A Story of the Future.

Wallace-Wells comes to this topic as deputy editor of New York magazine, where he has in recent years immersed himself in climate science conversations. He uses the space of 320 pages to expand on the ideas that surfaced in his “Life After Warming” column.

“This is not a book about the science of warming,” the author disclaims in the first few pages; “it is about what warming means to the way we live on this planet.”

The way we live, and will be living, is covered in the “Elements of Chaos” portion of the book. From wildfires to hunger to ocean acidification, Wallace-Wells smothers the reader under the weight of facts, the reader who is likely aware of some or all of these events, but perhaps not all at once.

Yet, there is nothing alarmist in his angle. If anything, it is overly conservative and too optimistic. The author claims: “No matter how out-of-control the climate seems — with its roiling typhoons, unprecedented famines, and heat waves, refugee crises and climate conflicts — we are all its authors. And still writing.”

Even then, there would be a person who cares, and the question of caring is what drives Uninhabitable Earth.

Wallace-Wells delves into what has taken so long for climate science to enter the general population’s consciousness. “Rhetoric,” he writes, “often fails us on climate because the only factually appropriate language is of a kind we’ve been trained, by a buoyant culture of sunny-side up optimism, to dismiss categorically, as hyperbole.” To put it plainly, our culture tends to believe that bad news is an exaggeration of the facts.

“Scientific reticence is another reason we don’t see the threat so clearly,” the author contends. Wallace-Wells has not been the first to voice this either. Here, the problem was not one of optimism or pessimism, but of a conservative bias, an aversion to the appearance of drama.

He names other factors — ambiguity effect, anthropocentric thinking, automation bias, bystander effect, confirmation bias, default effect, status quo bias, endowment effect, illusion of control, overconfidence, and bigness — “as an excuse for complacency.” By bigness, he is referring to the enormity of the problem. It’s global. Vast. Far too many moving parts.

How do we overcome these obstacles in time to salvage our habitat?

Countering the norm of  sunny-up up optimism, Wallace-Wells concludes that “fear can motivate, too.” He cites a study which found that “despite a strong consensus among climate scientists about ‘hope’ and ‘fear’ and what qualifies as responsible storytelling, there is no single way to best tell the story of climate change, no single rhetorical approach likely to work on a given audience, and none too dangerous to try. Any story that sticks is a good one.”

Not afraid to learn more about climate science? The Connecticut Science Center’s new permanent exhibit “Our Changing Earth” explores how our choices impact the world around us.

Kerri Provost is a Communications Research Associate at the Connecticut Science Center who has an interest in fluvial geomorphology, is outdoors whenever possible, and is currently attempting to walk every block of Hartford. There are worse goals! She is the co-producer of the Going/Steady podcast.